Life beyond the brief anomaly

Carbon civilisation is powered predominately by finite fossil fuels and with each passing day it becomes harder to increase or even maintain current supply. Our one-off fossil energy inheritance is but a brief anomaly in the evolution of the human story, a momentary energy spike from the perspective of deep time.

Both of which are consequences of the modern world’s fundamental reliance on the energy abundance provided by fossil energy sources. Can renewable energy replace the fossil energy foundations of carbon civilisation? This book examines these issues and presents a narrative linking energy and society that maintains we should be preparing for renewable futures neither of energy abundance nor scarcity, but rather energy sufficiency. For industrial societies, this means navigating energy descent futures. 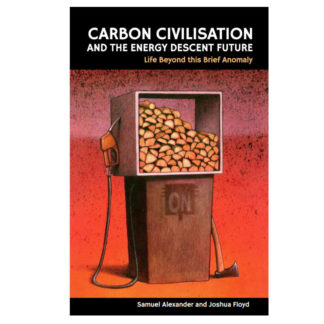 You're viewing: Carbon Civilisation and the Energy Descent Future AUD $27.95
Add to cart
0