Crisis as Opportunity in an Age of Limits

Calling for a sufficiency-based culture of ‘simple living’ to underpin a macroeconomic framework of ‘degrowth’, Samuel Alexander draws on a remarkable breadth of economic, political, ecological, and sociological literature to explore the radical implications of living in an age of limits. Written with clarity, rigour, and insight, this book will both challenge and inspire.

‘Prosperous Descent is a creative and important contribution to a movement with surprising momentum, one that challenges the very notions of progress and wellbeing on which our societies are constructed. It is a radical challenge in the best sense of the term. We can all learn a great deal from Samuel Alexander, both about our societies and about how to live our lives.’
– Clive Hamilton, author of Affluenza: When Too Much is Never Enough and Growth Fetish

‘This timely book reminds us that the good life is the simple life; a life within limits. It is a truly interdisciplinary volume, covering topics from the macroeconomics of a planned degrowth, to the ecology of planetary limits, to the sociology of voluntary simplifiers. A must read.’ – Giorgos Kallis, co-editor of Degrowth: A Vocabulary for a New Era‘Consumer capitalist society is characterised by a deep feeling of anxiety and isolation. It persists by inculcating a deep sense of disempowerment and diluting our radical imagination. The strength of this book lies in its ability to delicately weave together not only the theory but also the practice of simplicity. It carries with it the moral weight of generations of people who have demonstrated a different way of living and the shallowness of consumer society.’
– Peter D. Burdon, author of Earth Jurisprudence and co-editor of Wild Law: In Practice 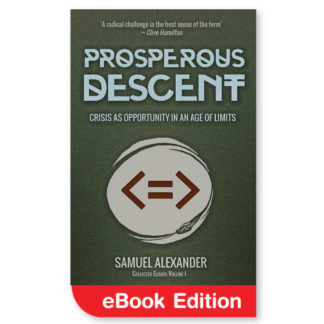