Enough, For Everyone, Forever

In this second volume of collected essays, Samuel Alexander develops the provocative ideas contained in “Prosperous Descent: Crisis as Opportunity in an Age of Limits”. Industrial civilisation promotes mistaken ideas of freedom and wellbeing, while placing unsupportable burdens on the biosphere.

This being so, Alexander argues that the richest nations need to transcend consumer culture and initiate a ‘degrowth’ process of planned economic contraction. To achieve this, he shows that we need to build a post-capitalist politics and economics from the grassroots up, restructuring our societies to promote far ‘simpler’ conceptions of the good life, based on notions of sufficiency, frugality, appropriate technology, and local economy.

‘With the vision of a prophet, the eloquence of a poet, the forensic detail of the scholar, and the engaged passion of an activist, Samuel Alexander offers critique, analysis and strategy for a post-growth society beyond carbon-fuelled, consumer capitalism. It is a truism that ‘where there is no vision the people perish’. This book in its comprehensive scope presents a challenging, provocative and absolutely necessary vision, synthesising theoretical and practical considerations related to understanding the current crisis of ‘the human condition’, and offering informed suggestions as to what comes after the unsustainable growth economy. They say knowledge is power, if so, arm yourself by reading and (re)acting to and on this book, notes from the ‘front line’ of our crisis-ridden but self-transforming present.’
– John Barry, author of The Politics of Actually Existing Unsustainability

‘Impressively researched, eloquently argued, and deeply engaging, Samuel Alexander’s work sits at the forefront of the degrowth movement. More than just a powerful critique of the capitalist growth economy, this book highlights the promise – and the necessity – of localised, ecological economies as the only means of adequately confronting the crises that are converging upon us. At times his vision of the future may be challenging, but it is never despairing, and ultimately the reader comes away uplifted and inspired. Alexander convinces us that less can indeed be more.’
– Helena Norberg-Hodge, author of Ancient Futures and producer of The Economics of Happiness 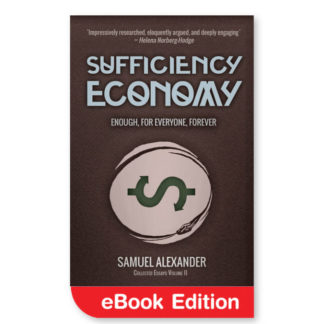