This Civilisation is Finished eBook

Conversations on the end of Empire – and what lies beyond

By Rupert Read and Samuel Alexander
Postscript by Helena Norberg-Hodge

This book is for those ready to accept the full gravity of the human predicament – and to consider what in the world is to be done. How can humanity mindfully navigate the inevitable descent ahead? Two critical thinkers here remove the rose-tinted glasses of much social and environmental commentary. With unremitting realism and yet defiant positivity, they engage each other in uncomfortable conversations about the end of Empire and what lies beyond.

Industrial civilisation has no future. It requires limitless economic growth on a finite planet. The reckless combustion of fossil fuels means that Earth’s climate is changing disastrously, in ways that cannot be resolved by piecemeal reform or technological innovation. Sooner rather than later this global capitalist system will come to an end, destroyed by its own ecological contradictions. Unless humanity does something beautiful and unprecedented, the ending of industrial civilisation will take the form of collapse, which could mean a harrowing die-off of billions of people.

‘A brave and necessary conversation, which digs deep into ideas which will make many people – including many greens – uncomfortable. This book should help everyone to question their own assumptions.’
– Paul Kingsnorth, co-founder of The Dark Mountain Project

‘Decades of pretence are coming to a close. Rapid changes in our climate are waking us up to the reality that we and the Earth are one system. The wasted decades mean we are woefully unprepared for the consequences of our actions. Read and Alexander show that our civilisation of separation is finished. They invite us to start having difficult but creative conversations about the shape of what’s to come and how we might get there. A helpful balm for climate anxiety – this book leaves you feeling that something could be salvaged and something better might even be born.’
– Jem Bendell, author of “Deep Adaptation”

‘Far from urging dejection or despair, these authors look at the greatest challenges facing humanity with unusual honesty – and yet they find meaning, purpose, and perhaps even hope in unexpected places.’
– Richard Heinberg, author of The End of Growth

‘Bring your fear, your despair and your hope to this book – it will nurture them all with sharp and nuanced insight.’
– Kate Raworth, author of Doughnut Economics 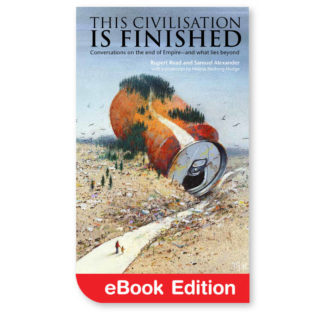 You're viewing: This Civilisation is Finished eBook AUD $4.99
Select options