The Case for Sustainable Meat Production

Defending Beef is simultaneously a book about big ideas and the author’s own personal tale—she starts out as a skeptical vegetarian and eventually becomes an enthusiastic participant in environmentally sustainable ranching.

While no single book can definitively answer the thorny question of how to feed the Earth’s growing population, Defending Beef makes the case that, whatever the world’s future food system looks like, cattle and beef can and must be part of the solution.

For decades it has been nearly universal dogma among environmentalists and health advocates that cattle and beef are public enemy number one.

In Defending Beef, Hahn Niman argues that cattle are not inherently bad for either the Earth or our own nutritional health. In fact, properly managed livestock play an essential role in maintaining grassland ecosystems by functioning as surrogates for herds of wild ruminants that once covered the globe. Hahn Niman argues that dispersed, grass-fed, small-scale farms can and should become the basis for American food production, replacing the factory farms that harm animals and the environment.

The author—a longtime vegetarian—goes on to dispel popular myths about how eating beef is bad for our bodies. She methodically evaluates health claims made against beef, demonstrating that such claims have proven false.  She shows how foods from cattle—milk and meat, particularly when raised entirely on grass—are healthful, extremely nutritious, and an irreplaceable part of the world’s food system.

Grounded in empirical scientific data and with living examples from around the world, Defending Beef builds a comprehensive argument that cattle can help to build carbon-sequestering soils to mitigate climate change, enhance biodiversity, help prevent desertification, and provide invaluable nutrition.

Be the first to review “Defending Beef” Cancel reply 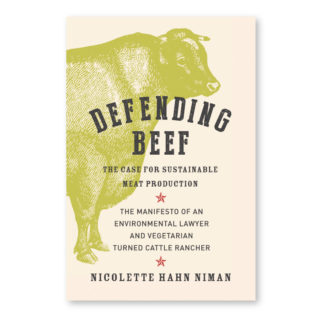