Degrowth, Permaculture and the Simpler Way

‘Building bridges between different schools of thought, Samuel Alexander outlines an alternative to the nightmare of a growth society racing towards collapse, articulating various post-capitalist approaches, between anarcho-marxism, wild democracy and spirituality. In doing so this book attempts to overcome the old divide between reformism and revolution.’
– Serge Latouche, author of ‘Farewell to Growth‘.

‘Wild Democracy is a daring and compelling collection of essays that explores the theory and practice of moving towards an equitable, post-growth society, and defends an alternative, post-consumerist account of human flourishing. Thoreau believed that ‘in wildness lies the preservation of the world’ and Samuel Alexander has shown us how we do this in our backyards, our local communities and our everyday practices. He has done Thoreau proud.’
– Robyn Eckersley, author of ‘The Green State: Rethinking Democracy and Sovereignty‘ 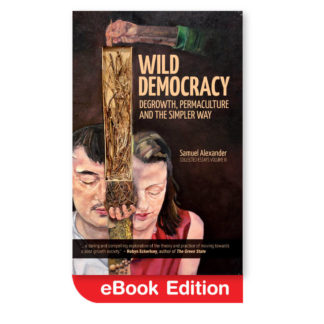